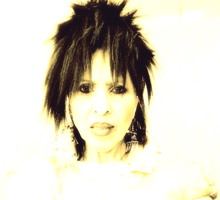 In the spirit of two fisted political singer songwriters such as Nina Simone and Joni Mitchell, NONA HENDRYX tackles social issues, love and politics with a smoky vocal tessitura somewhere between funk and the end of the stratosphere. Hendryx’s legendary career spans six decades of sound and style evolution. Fans know her as a founding member of the girl group, Patti LaBelle & the Bluebelles (with Sarah Dash, Cindy Birdsong and Patti LaBelle) known as “the Sweethearts of the Apollo Theatre” and inducted into the R&B Hall of Fame in 1999. In the 70s, the group morphed into the Rock & Funk Glam Diva’s Labelle with the #1 record, Lady Marmalade. Hendryx emerged as the chief songwriter of the group’s socially conscious and illuminating message songs. If Labelle fans grieved the end of Labelle, Hendryx fans welcomed a new one as the revolutionary art-rock, new-wave goddess embarked upon her own impressive solo career, which spanned eight studio albums and engaged her with an impressive lineup of collaborators (Prince, Peter Gabriel, Talking Heads, Laurie Anderson, Bono and Cameo), resulting in top ten hits and a Grammy nomination.

Fast forwarding into the 20th and 21st century, Nona Hendryx remains the Queen of Transformation: writing music for theatre, a play with music (BLUE written and directed by Charles R. Wright and starring Phylicia Rashad for Arena Stage and the Roundabout theatre in NY), composing music for film (the Lee Daniels 2010 Oscar-nominated Precious), producing and collaborating in the works of a new generation of artists, cowriting songs, and appearing on the Terri Lyne Carrington Grammy Award-winning Mosaic Project Hendryx is an activist and vocal supporter for women’s rights, social, political and criminal justice. She has helped to raise funds and awareness of HIV/AIDS from the outbreak of the epidemic and is still involved today. Dreaming of being an educator Nona worked with education organizations supporting women in prison, a school in Chicago, Little Black Pearl, taught stage craft at The Clive Davis Recording Academy and founded in 2016 her own non-profit, SisterSMATR.org to bridge the gap in science, math, art, technology and robotics for young women of color ages 14 to 18.

Hendryx added Ambassador for Artistry in Music at Berklee College of Music in Boston to her career. Working across three departments; Music Ensemble, Music Theater and Berklee’s Electronic Production and Design Department with the guidance of the EPD Chair Michael Bierylo and co-Chair Michele Darling.

Hendryx presented multimedia performances at MoogFest and MASS MOCA collaborating with Visual Artist, Nick Cave (Until and The Let Go). She created and directed ‘The State Of Grace’ a celebration of the artist Grace Jones, performed in the cavern like Drill Hall in The Park Avenue Armory for Theaster Gates’ Black Artist Retreat. Having made yet another transformation into a multimedia CyberDiva, Hendryx writes music across genres with politically and socially relevant lyrics wrapped in neo-funk grooves, other worldly sound designed music, soulful vocals and art-rock charged rhythms. Performing in and writing a song ‘Grace’ (Trust and Believe) for Carrie Mae Weems’ Grace Notes marked the beginning of another artistic collaboration.