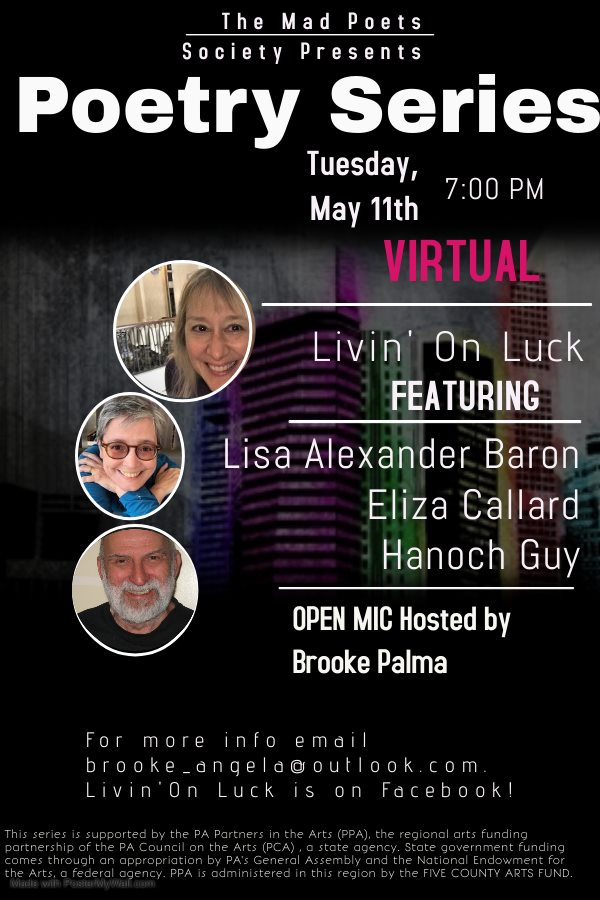 Livin’ on Luck is pleased to welcome three amazing writers for our May event: Lisa Alexander Baron, Eliza Callard, and Hanoch Guy! This is as always a free event and will feature an open mic after the featured readers!
Register here: https://wcupa.zoom.us/…/tJ0pcO6tqTwsGNTt_ADhKJdls77-IdN…
BIOS:
Lisa Alexander Baron is the author of four poetry collections, including While She Poses, poems prompted by visual art. Her poems appear in Chautauqua, Confrontation, Potomac Review, Fourth River, Philadelphia Stories, and others. She teaches writing for advocacy and public speaking at two Philadelphia-area colleges. Modern Plays Read Aloud is a group she hosts for writers and actors on MeetUp.
Eliza Callard is an artist and poet from Philly. She has had poems published dozens of times in print and online. She loves drawing portraits and illustrating. She spends her days doing creative work, exercising, and taking care of her cystic fibrosis. Her website is www.elizacallard.com.
Hanoch Guy Ph.D, Ed.D spent his childhood and youth in Israel. He is a bilingual poet in Hebrew and English. Hanoch has taught Jewish Hebrew literature at Temple University and poetry and mentoring at the Muse House Center. He won awards in the Mad Poets Society, Phila Poets, Poetry Super Highway and first prize in the Better than Starbucks haiku contest. His book, Terra Treblinka, is a finalist in the North Book Contest. Hanoch published poems in England, Wales, Israel, the U.S., and Greece. He is the author of nine poetry collections in English and one Hebrew book.
+ Google Calendar+ iCal Export